This phase was more of a big ski trip, kind of like a dangerous, 5 day  endurance event in one of the most beautiful places in Canada… the Rockies!

After finally getting home from the arctic, it was a mad dash of ripping kit apart, washing, then repacking, we hopped into 4 rental trucks and left the next morning… like back in week 3, it’s a 2 day drive to Alberta, and we were behind a day so lots to make up for. All we lost, despite the 72 hour delay, was a day of downhill skiing in Lake Louise. We arrived at a hostile in Lake Louise the following day (spent the night in Kamloops BC).

Now began the catch up. We met our mountain guides and had classes all night. This mostly consisted of telling us how dangerous the trip would be. Explaining all the avalanche terrain we would be in, and telling us we will be in the same spots as some people who were recently injured or killed in avalanches… oh and they briefed us on once we were on the glacier, how we would we roped to each other in case someone fell into a crevasse… course I didn’t tell this to Beck until after the trip 😉 we also got issued some additional equipment such as beacons we had to wear (so they could find us in an avalanche), a 240cm probe (for poking avalanche debris to find a person), shovel each (for digging each other out of avalanches) oh! And dehydrated food for all our breakfasts and dinners. 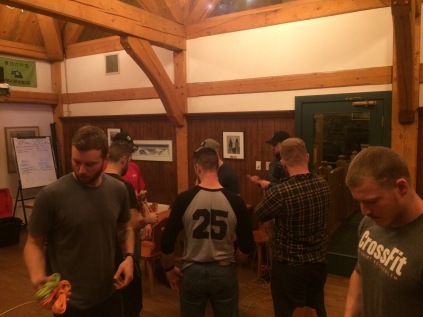 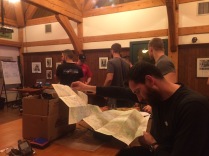 Day 1: Trail head to Bow Hut.
The first day was a hump to get into our first hut which was just before the glacier. The trip was done on alpine touring skis. And you carried all your own kit (maybe a 50pound rucksack). The way it works is, you’re wearing a downhill ski that you attach what’s called “skins” to. The skins are like a feather-like fabric that sticks to the bottom of your ski. The hairs are aligned in such a fashion that allows the ski to glide forward but it grabs the snow with any resistance backwards. This allows you to essentially walk up hills no problem. Along the way we stopped for some learning opportunities where the mountain guides talked and taught us all kinds of stuff, these guys were incredibly knowledgeable. First we crossed the lake and followed a creek for a bit, then began our climb through the trees to get above tree line. The parking lot was at 1500m (5000ft) and the first hut was at 2100m (6900ft). Day one was 6km (3.8 miles), took 5 hours to reach the hut followed by classes until 930pm (to catch up for the delay) it made for a long day but we were back on schedule. The hut was surprisingly nice! Sure beats pooping in igloos…

Day 2: Bow Hut to Peyto Hut
This is where stuff got real… traveling on glacier. There’s a steep hill right outside the hut that took us right up and onto the glacier. Time to tie into a rope that would be my life line for the following 3 days. We learned more about assessing avalanches and navigating in the mountains. And navigation included probing the snow ahead of you to make sure you were standing on ice instead of a hole that you could fall into. The visibility was pretty poor, and the wind was giving it… after about 6 hours of walking, with a quick lunch break, we could see the next hut and it was a downhill ski to the hut. 8km (5mile) total distance. So you take the skins off your skis and we did some skiing. Got to Peyto Hut around 230pm, and did 3 hours of crevasse rescue practice. In true Sar fashion, this consisted of someone in a rope team intentionally walking into a crevasse and we learned how to rescue them. It was pretty neat; your team (usually 3 + the 1 in the hole) takes up the weight while someone digs a trench to put their skis in to anchor the person to. Then you build a rope system to haul them out. To add insult to injury the weather was picking up to a blizzard but we pressed on to finish the training. Finally got our boots off, ate some dinner, another class or 2 then bed… ahhhh, tomorrow is a long one.

Day 3: Peyto to Belfour hut (the other side of the glacier)
I was up for breaking trail. The first hour and a half I broke trail up the hill we skied down the previous day. I learned a TON from the guide, it’s not as easy as just walking, there’s specific ways to gain elevation, you can’t just go straight up… we also had very low visibility, all I could see was white. With no reference ahead, I couldn’t even tell if I was on a hill or not or if I was going right or left or anything. Used a compass, the sun, and seldom could you see a mountain to use as a reference. I managed to get within 150m of our first way point… After 90min we were up the hill, switched leaders, and continued… not 2 min later I hear “Hard Left! HARD LEFT!” a course mate nearly walked into a crevasse, I can’t explain, but all you see is white if there are no people in front of you to get a reference. Luckily the mountain guide somehow noticed and we avoided it. The leader probed the ground, took a step, probe, step, probe etc… several hours later we crossed over a ridge, we had to remove our skis and walk over rock to pass to the other side, pretty sketchy, then a short ski down to the base of a mountain. We had some time and the weather cleared a bit so we dumped our ruck sacks a trekked up the mountain to summit Vulture Peak (picture included) 3000m (10000ft) elevation. After a quick picture we took skins off again and skied down to our packs. It was now a 45min downhill ski to the next hut. 8 hour 20min total and 14.36km (almost 9miles) travel. Boots off ahhhhh!, quick lecture on properties of snow and one of the best sleeps of the trip.

Vulture peak is the highest peak in the picture above.

Day 4: Belfour back to Bow Hut
That 45min downhill ski I mentioned yesterday? You guessed it! Back up it, back over the ridge walking on rock and a ski down to almost Bow Hut. We stopped just before the glacier turns back to mountain for a few things. We dumped our packs and quickly summited a less impressive mountain then vulture peak, hung out a bit then skied down to our packs. We learned the most efficient way to dig a giant ass hole. It was crazy! In 3 teams of 4 we all dug 1.5 meter (5feet) deep, 2 meter wide hole in 3min. We also did some snow tests to learn about how different layers affect avalanches and such… we practiced looking for buried beacons and practiced assembling our probes and shovels quickly in case of emergency. After nearly 4 hours there was a gentle ski down to Bow Hut. It was a full day and about 6.5km (4miles) distance covered. The final night was pretty chill, shooting the shit and hanging out.

Day 5: Bow Hut to Parking lot
This was a good day, we did the reverse of day 1 so basically all down hill until the lake and then a flat ski across to the trucks. Took us half the time ha! 2.5 hours. On the lake we skied as a big group and did a debrief; everyone sharing stuffed they learned and the mountain guides said their last words. We were back at the trucks and a shower was a short 5 hour drive away! Got back to Kamloops, had a shower, got a hair cut and shaved all the facial hair… GASP!! then ate some delicious food… We then headed back to Comox to do some post-ex and back to work the next morning.

Another long update, but the support from everyone is amazing!