This is typically a 4 day course taught to all aircrew in the military. The goal of the course is to teach pilots how to survive with the gear they have if they eject from an aircraft and land in the ocean… remember, they’re pilots not survivalists, so they’re not as comfortable in these positions… We jump out of planes into the ocean intentionally, so naturally the course had a little bit of a different feel to it… more “robust” if you will. 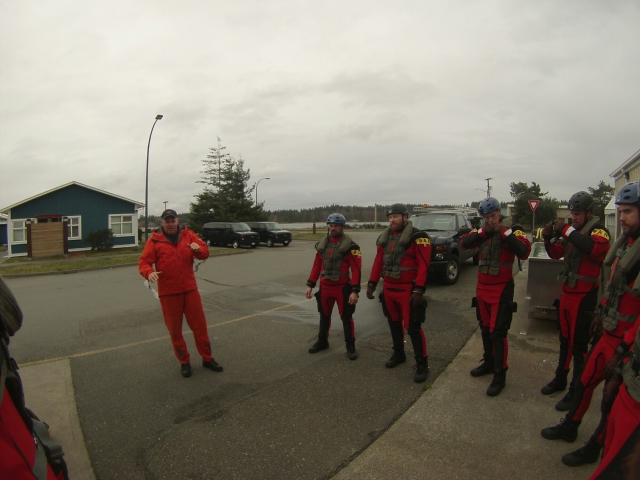 We showed up early on day one and the instructors walked us down to the ocean in our normal clothes. “Into the water! Ditching ditching ditching” We all jumped in to the frigged 8 degree water, hung out for about a minute before being told to hop out… “see how much that sucks?” ask the instructor… “now lets learn how to do this properly and survive”… Great start to the week!

The first day was land instruction all morning, getting familiar with all the sea survival equipment we carry as well as look at some off the stuff we might send out to distressed boats ect. We learned about the theory of sea survival and the pattern to follow that gives the best chance of survival. One of the more important things we did was read over a mission statement from a fellow SAR Tech who actually did get stranded at sea and was left surviving all night in a terrible storm in the Arctic. We lost a brother on this mission, so reading a story from a surviving SAR Tech of his accounts of the mission made it very real, and definitely made everyone pay attention.

In the afternoon we practiced in the water with the 10-man life raft as well as different techniques when you’re surviving with multiple people. One of the things we did was swim together. Everyone lines up with their feet/legs wrapped around the person in front of them and everyone strokes there arms together to move. We swam about 300m, it was quite effective.

The next day was multi-man survival day. They took all 11 of us out to sea and kicked us off the boat with a life raft. With a quick head count we were missing someone, so we inflated our raft and did a quick search followed by a rescue swim to recover him. Once all 11 of us were in the 10 man craft, we carried out our survival pattern. Bailing out water, trying to make fresh water, tying down the raft. I spent the time bailing out water, the waves were pretty decent and the boat would come by to splash us every now and then. A few people didn’t handle the sea as well as others and ended up puking but whatever, the ocean sucks!

The final day was all parachute drills. We learned all about the kit we carry when we intentionally parachute into water, and since we’ll typically be by ourselves we learned about single man survival. The idea of this training was worse case scenario. That worst case scenario goes like this; You parachute out, have a malfunction, cut away your main canopy and now are left with a reserve canopy AND when you land in the water, the winds are high so you end up getting dragged by your parachute… And that is how they trained us. We got into parachute harnesses and they dropped us off the end of a boat and dragged us while we practiced UN-fouling ourselves. We were dropped 3 times and on the 3rd time we actually deployed our survival raft and were expected to survive until picked up by a boat. We were in these tiny-ass rafts for about 90min or so…
Check out the video below!